WIRELAND is a game for Windows about a catboy whose girlfriend's physical body was kidnapped (by an alternate version of herself??)

It's about 1-2 hours long and has 2 endings. I made this game for my boyfriend's birthday ^^

Hey there!
I played your game on stream. I (and my viewers) found the art style and attack animations really cute, but I found the writing to be a bit amateurish, and it suffers from a problem a lot of turn-based RPGs suffer from where the beginning encounters are mostly just mashing A A A A A (or I suppose, since this is keyboard and mouse, it's Enter, Enter, Enter, Enter)

It's also unfortunate that you didn't include options, such as YEP Keyboard Config. You can watch my full stream below and you can use the chapters to skip to your game. It's been awhile since you released anything, on a final note I checked to see what you have done since this game and was disappointed this was your most recent release. I hope you have something great cooking.

I just want to say that I played and loved the game, it's so cute and wholesome, most of the characters are so likeable and even the battles are fun, more ppl need to play him.

"I know I'm 2 years late into the game, but I just want to say that I like this game a lot. Sure, the twist at the end is very predictable, but I like it because of how cute it is, especially since it was made as a birthday gift."
Reply
Brieareos82 days ago (1 edit)

Hey, so I was really enjoying the game, but I got stuck at the art part, it just lets me continuously criticize the kids art and I'm stuck in one spot.

Ok so turns out I got stuck behind the table but when I talked to the kid head on it fixed it.

After 20 minutes play. It's good game and the direction artistic is so cute !
Just, where EXIT button ? :D

i cant download on itchio launcher. can u fix this , plz?  i think cause of error is .zip format

The good and cute.

Your game dosen't install using the itch.io app, think you need to set platforms to Windows in the meta-data and maybe something on the download.

This game is great, I love the artwork, it is beautiful, I just wish that it was longer, or like bosses had more health, because it is so good, I would push Undertale down to 4th place and put this game as my third favorite game and incredibly close to my two first places, OneShot and Deltarune, just because of the artwork alone. The music for this game fits, while I don't remember much of it, (probably because my head is filled with Big Shot, World Revolving, and every possible Megalovania remix, or just my bad memory, or the fact that I wasn't paying attention to the music, because the art is soooooooooooooooooooo good [Like how you did you do it so well, when I draw just a stick figure it look like a Disfigure {I am cursed with the powers of bad puns}]), that doesn't matter because if it was different, it just wouldn't work as well. And the story is the simplistic cliff hanger mystery kind of thing I love, if that makes sense because I sure as heck don't know what I said. Normally I don't leave comments on anything, but this game is so indescribably good that I had to, which is honestly why I want the bosses and game itself to be longer, but also, I feel that maybe it's better short or something. This game feels kind of feels like a demo to a game that had trillions of dollars of funding or what not. Anyway, my point is this game is amazing, so amazing that it's comparable to some of the best story games I can think of, and even better than one of them. Now I finally got my rant out for the hour, and it was on (in my opinion) one of the best games of the 2020 decade, and that's saying a lot since more of Deltarune is coming out in 2025, and Deltarune CH. 2 came out this year. Okay now I'm done talking, also if something I said doesn't make sense it's because A. I no grammar, B. I bad with words, and C. This game is amazing beyond words. Also (part like 1000000000 by this point) I imagine that your boyfriend had the ultra-omega awesomest birthday ever. Also (part like 1000000001 by this point) I can't be the only person that at first thought that Spicy Wires balloon was not a balloon, right? Also (part like 1000000002 by this point) I just went to the soundtrack demo on YT and I remembered all the songs by listening to them, I guess I just needed a bit of a reminder. I feel like I wrote an entire book long enough to put into the Guiness Book of World Records at this point so I am stopping myself here.

I also think someone should totally make a WIRELAND (also why is it all caps?) Megalovania. That would be awesome, or like a Liar bergentruckung/ Asgore, maybe a Byubyu Nyeh heh heh/ Bonetrousle, and a True Wire Megalovania, also a Bug Wire Spider Dance, a Spicy Wire Death by Glamour, a Shop Wire Heartache, a Meat Wire Dummy!, a I dunno a Bad CG Wire Spear of Justice. Also I guess Shop Wire/ Liar would also kind of be Flowey the Flower, Shop being Asriel Dreemur, Liar being normal Flowey, and Destructive Wire being Omega Flowey. Why did I just make a WIRELAND Undertale AU, WIREtale, why do I make an UT AU out of everything, I even made an UT AU out of the middle portion of my right foot in my sleep yesterday. Or just make it where Shop Wire/ Liar is literally every UT character, to make ShopLiarWIREtale, SLWT.

I don’t think you noticed, but UNDERTALE is all caps as well :|

Damn, how did I forget that.

213 days later, a tldr for this is. Game good I like. And I wish you best of luck in game development. Just that this tldr is subtracting the extremely long rant that probably makes me look like that socially awkward kid in school, which I am.

The same phenomenon happened to me, and I couldn't move the game forward.    Where to give Syrup painting advice , After the advice,   I move to the left square of Syrup while darkening.   I can't get out of Syrup's room.    Isn't the designation of the movement event after successful advice wrong :D  ?

When helping syrup with drawing I get soft locked in the chair. Is there anyway to get out or to fix this?

nvm, I replayed that part and got through just fine

man im in love with this game already <3 so cute

i really love the game a lot ton i love the art and the characters but... its crashes in the final ecene and yep thats about it

Any chance of a android version coming in the future?

This Game Was So Awesome!

I Absolutely Loved It!

I can't unzip it correctly or something because it won't let me play it.

what does it show when you try to play it?

I think i fixed the bug, replace this file in "www/data".

Even though she is a ghost neko, it doesn't mean they couldn't have some fun, hihi xd 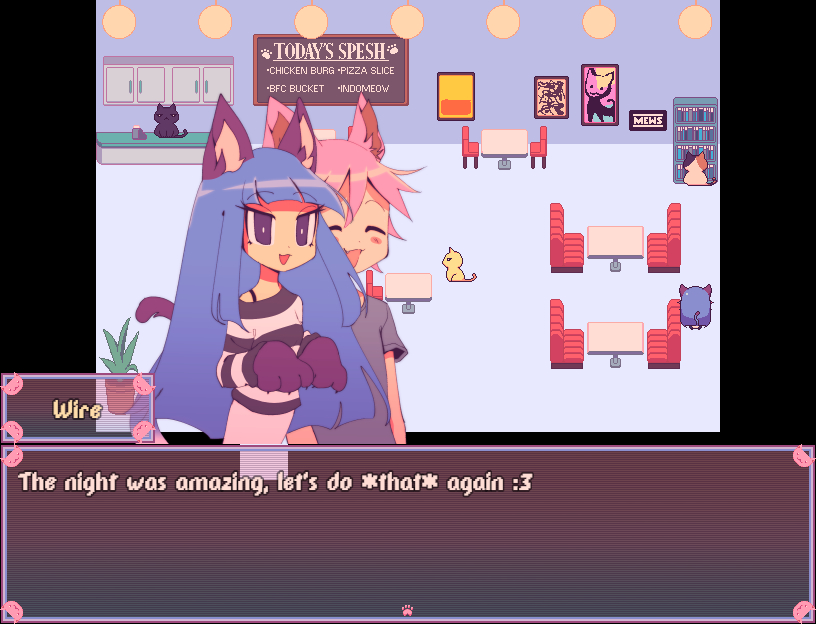 when does that happen

i loved this game <3

Is there any way to transnlate it, I would like to translate it to portuguese Brazil?

Hey, when I downloaded it, I had a FNF mod also installing, so I paused it. But when I unpaused it, it said "Failed - Network error" (My internet sucks X3), then "Failed - Forbidden" after I tried again. I'm currently trying to install it again, so hopefully it  works.

Ok, it installed. I guess it just throws a fit over being paused for 15 minutes. X3

I love this game... Is there any way to transnlate it, I would like to translate it to russian

this game is awesome! its nice you made a game for your boyfriend and i like the characters here! the boyfriend i love his pink hair and how hes confused, then the girlfriend i like how fiesty she is and the ghost form she has ending like a tail, the clinic being hosted by a normal cat is pretty funny and when you fight i love how when you hurt your enemies alot it shows them actually wounded, then laslty the items i like how simple they are like "burg", amazing job!

Reply
No_21 year ago

is that a jojo reference?

Reply
No_21 year ago

Can a Platform Tag be added to the game page? The Itch desktop app throws a fit and refuses to install the game if it's not there.

Is it avaliable for Mac?

i cant download it says forbidden when i finish

this app is call by neko kittys

Can you add platform tags to the page so the game can be downloaded through the Itch app?

does it have a debug mode / cheats

and i just want to know

Yes it's a reference to Indomie Mie Goreng. A lot of Indonesians think I'm Indonesian because of this reference but it's actually eaten a lot in Canada and America lol. I made references to other noodles and snacks I like as well.

This was a very cute and adorable little game! I enjoyed playing it, your boyfriend has to be the luckiest boyfriend IN THE WORLD, if he gets an entire video game dedicated to him on his birthday, like dang!

I do wanna say that I think Mochi's flop ability at the end makes the final boss somewhat too easy. I think it should be toned down, music for that fight was hype tho!

Her second form was designed to be impossible to lose.

I realized while making the last bit of the game that having 3 battles in a row at the end (and if you lose on the 3rd one you have to start over on the 1st again) kinda sucks from a game design standpoint lol. Didn't wanna frustrate people.

I literally just made an account to say how adorably sweet it is that you made this whole game for your boyfriend,it's an amazing game and it's really lovely of you 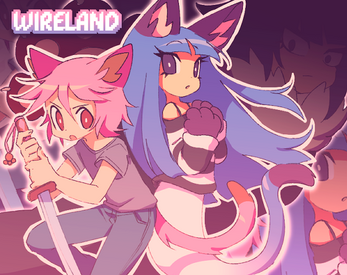 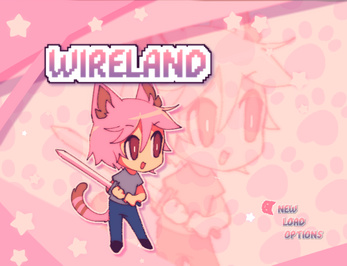 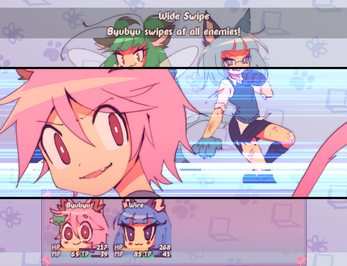 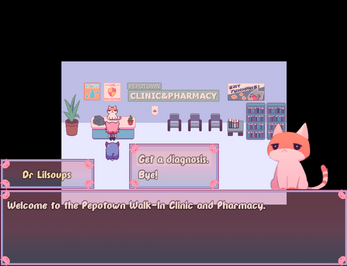 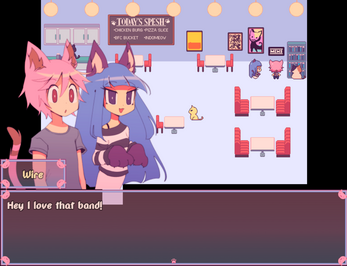 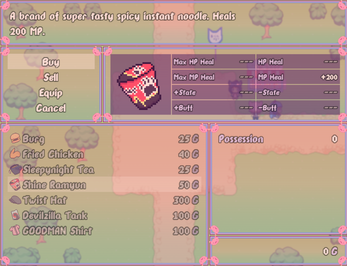